What is Brain Aneurysm?

Brain aneurysm is an abnormal bulge in the brain’s blood vessel. When it leaks or ruptures, it causes bleeding into the brain, otherwise known as hemorrhagic stroke. A type of hemorrhagic stroke called subarachnoid hemorrhage occurs in the space in between the brain and the tissues covering it. This is the type of ruptured aneurysm that requires emergency treatment as it is life threatening. 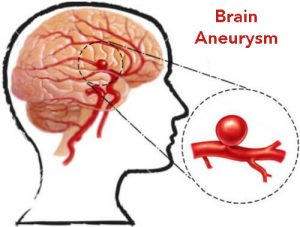 What are the Signs and Symptoms of Brain Aneurysm or Cerebral Aneurysm?

A small amount of blood can leak as a result of aneurysm leak. Severe headache that is sudden can only be caused by the leaking (sentinel blood).A leaking is always followed by a more serious rupture.

What are the causes of brain Aneurysm?

There are many conditions and factors that can lead to the formation of brain aneurysms.

The most common are smoking and uncontrolled high blood pressure. There are also genetic conditions including connective tissue disorders and polycystic kidney disease that can lead to aneurysm formation.

How is brain aneurysm diagnosed?

The majority of brain aneurysms never cause health problems; because of that, many go undiagnosed. Brain aneurysms typically are discovered only after a rupture, when the unruptured aneurysm is causing head pain, or when someone is undergoing tests for another condition. There are four main tests that can detect a brain aneurysm.

How is brain aneurysm treated?

Surgical clipping involves a procedure of closing off an aneurysm. The doctor places a metal clip on the blood vessel that feeds the aneurysm to stop blood from flowing through it.

Endovascular coiling is less invasive. A surgeon inserts a catheter into the artery from the groin. Through this catheter, a wire is inserted to coil up inside the aneurysm to disrupt the blood flow.